With a 3rd place prize, a best paper prize and a best system prize at the 2017 installation of the annual International Micro Air Vehicle (IMAV2017) conference and competition in Toulouse France, we have much to discuss. So without any further delay… here we go! 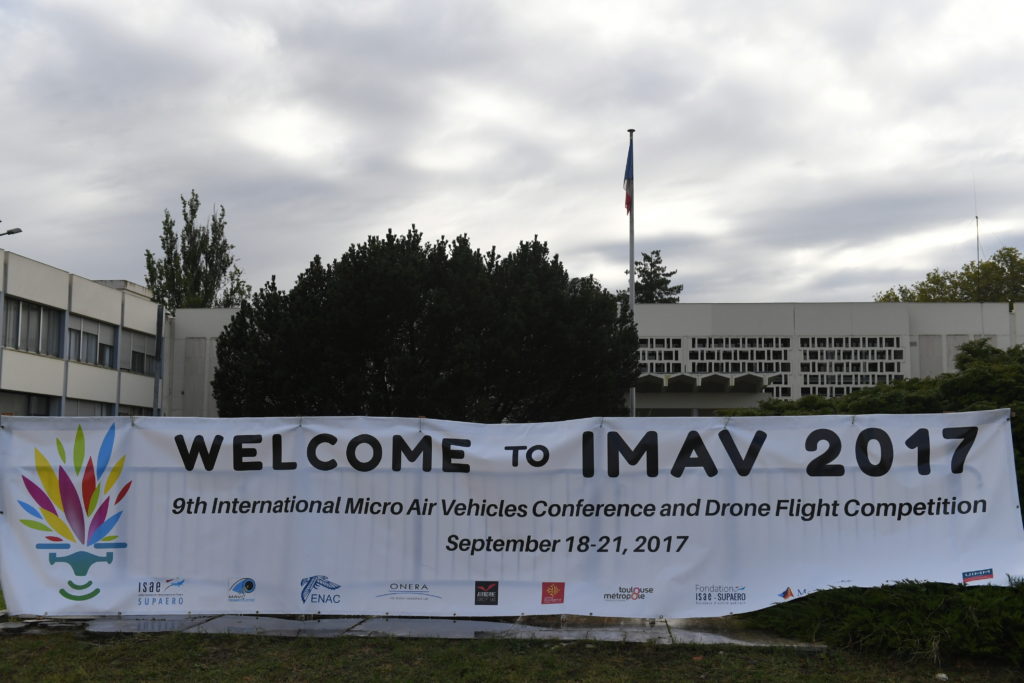 The IMAV kicked off with 2 days of interesting keynote speakers and interesting paper presentations. Some team members where quite busy at the conference as we presented a total of 4 papers! Most notably, work of Christophe De Wagter, Matej Karásek and Guido de Croon entitled Quad-thopter: tailless flapping wing robot with 4 pairs of wings was deemed to be the best presented paper. As a reward, their paper will be published in the International Journal of Micro Air Vehicles. 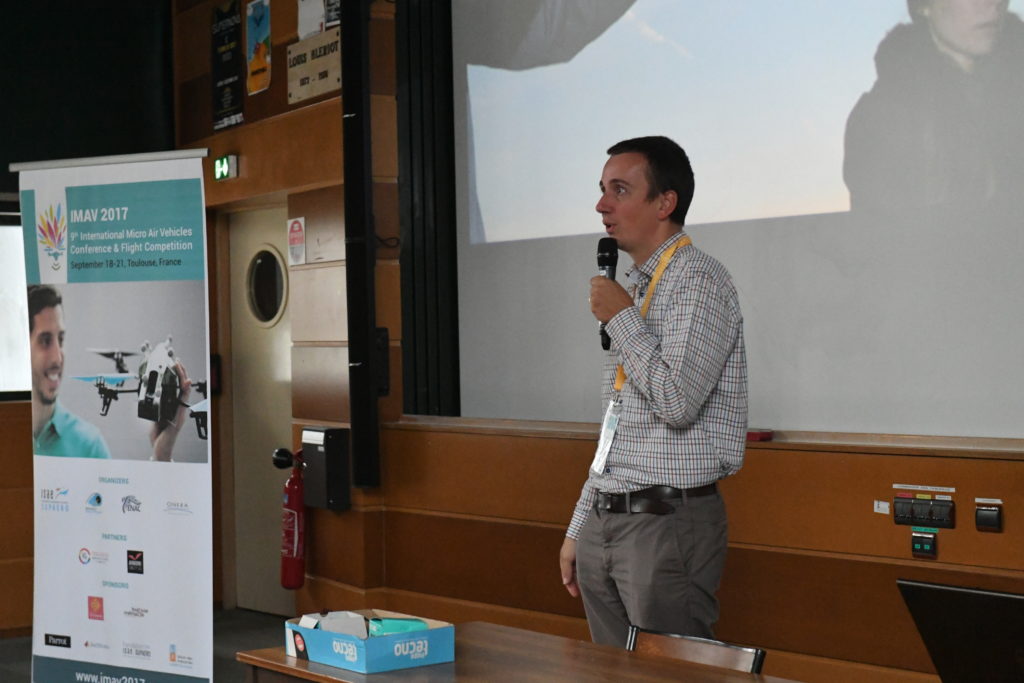 With the conference behind us, next up was the outdoor competition. Due to some resource limitations, we did not actively compete this year but we were able to show some of our work through a technology demonstration. Ewoud Smeur, a PhD candidate in the lab, in cooperation with the ENAC UAV lab, performed a very impressive tech demo with the Cyclone hybrid UAV. Ewoud demonstrated the vertical take-off capabilities of the Cyclone with the vehicle being simply hand launched from an outstretched arm. He then proceeded to show the wide flight envelope of the Cyclone by flying a square flight plan at increasingly aggressive flight speeds. The large crowd in attendance was quite impressed (as were some of our team who were seeing this for the first time!). 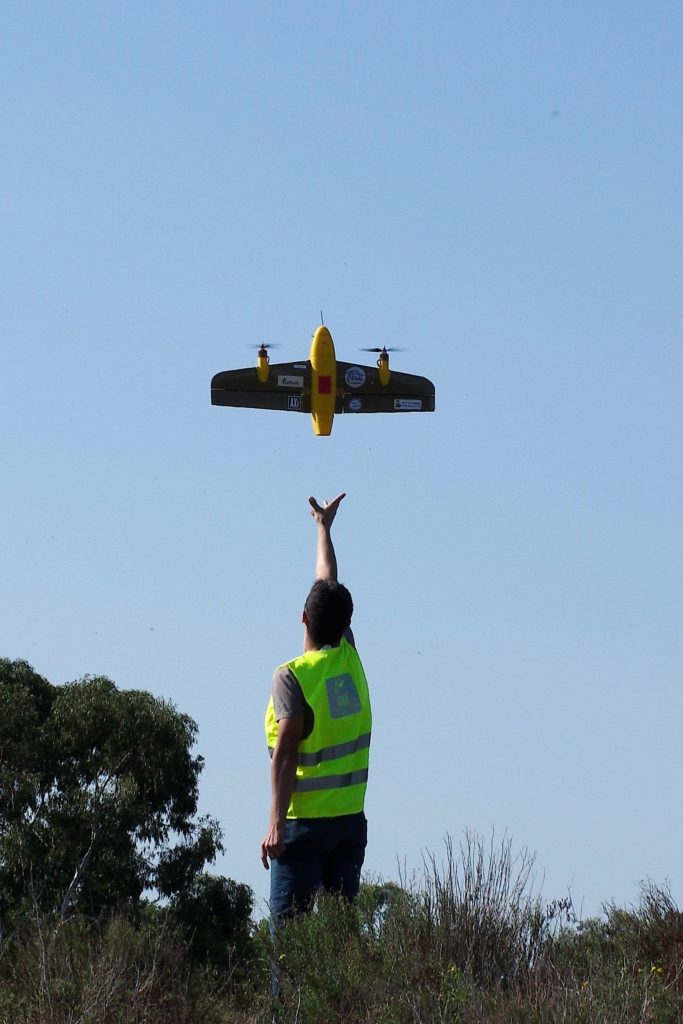 We also attracted a lot of attention to our table with the Delftacopter. It was a bit too large to fly in the limited space available next to the live runway next door, the crowd had to be satisfied with a static display. 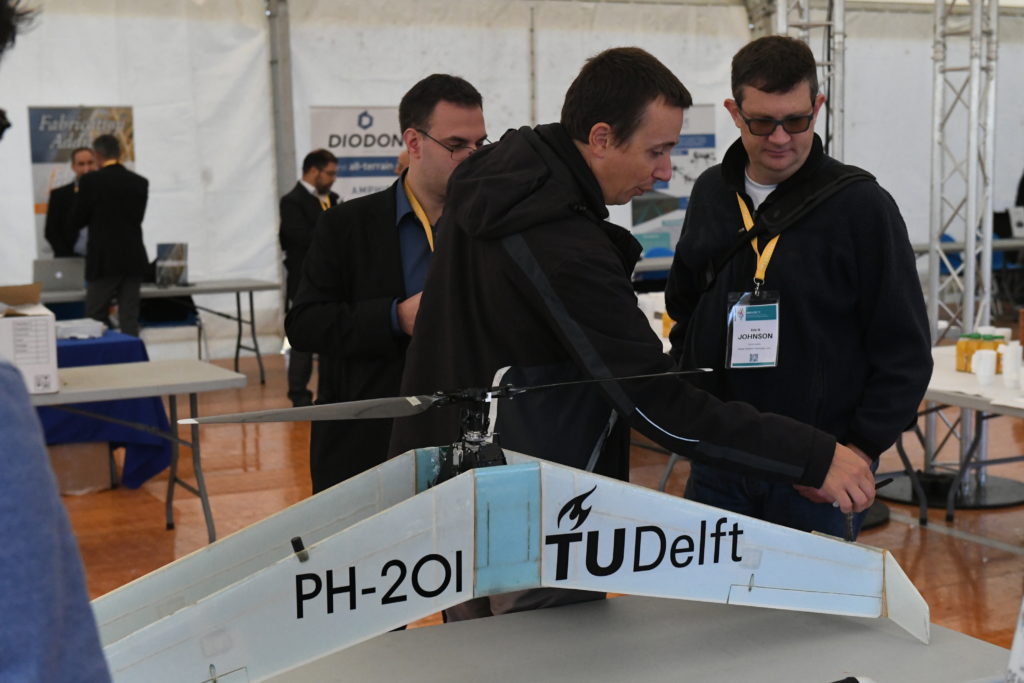 The final day of the IMAV was reserved for the indoor portion of the competition. This year we took the name of the competition literally and focused on competing with the smallest and lightest vehicles possible. Our efforts paid off as our 45 g pocket drone was at least half the size and a quarter the weight of any other vehicle used in the competition. 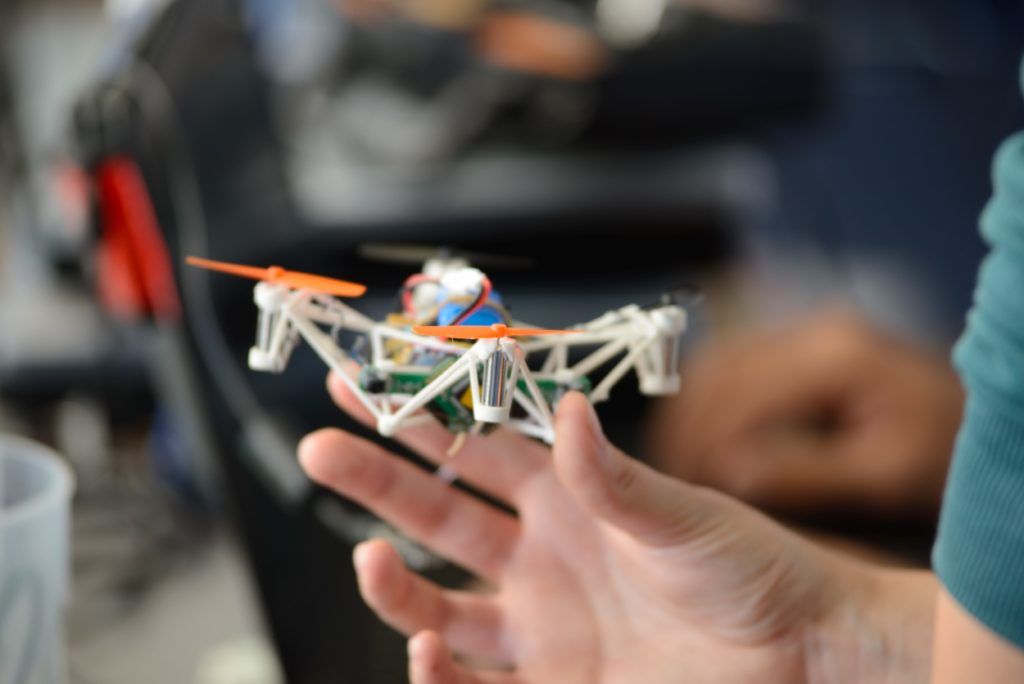 We were able to successfully perform autonomous window fly-through and flight through an obstacle zone with both our Pocket Drone and the DelFly Explorer. Both vehicles were equipped with our 4 g stereo-camera system which was used for simultaneous velocity estimation and obstacle detection. 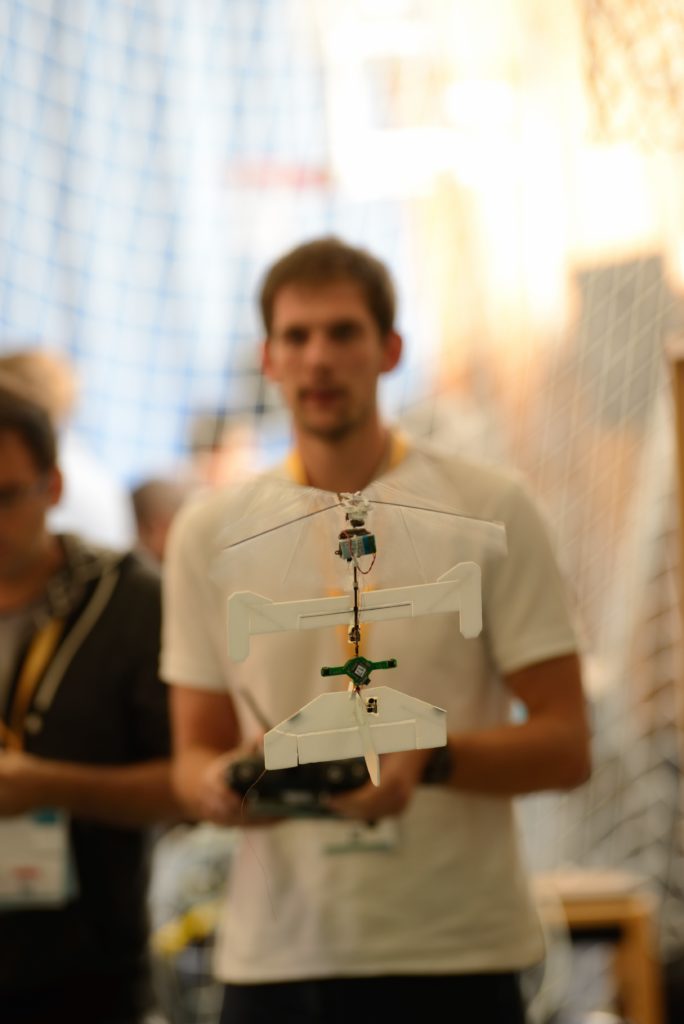 Another interesting challenge in the competition was the cooperative carry task were we had to carry a 500 g frame over a distance of 10 m. We performed this task with two Parrot Bebop 2 quadrotors equipped with ultra wide band (UWB) transceivers.

Normally, UWB are used to estimate relative distance between transceivers. We were able to use them to estimate the relative position of the vehicles. This was done by having the UWB modules transmit their velocity (relative to true north) and look at how the relative distance estimate changes over time. Combining this information in a Kalman filter, within a few seconds of flight we can effectively estimate the relative position of the other drone in a decentralized manner. This work has previously been demonstrated using Bluetooth transceivers but this is the first time we have demonstrated this principle working with UWB (with notably better results might I say). 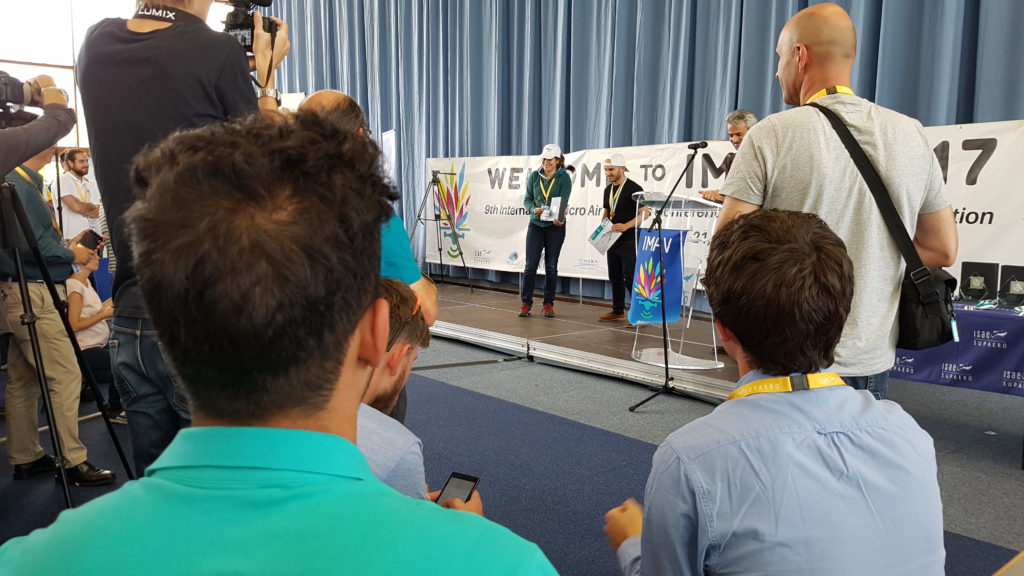 The judges were so impressed by our approach and the flight performance of our vehicles that they awarded us a special System Design prize. The theoretical and practical implementation of this work on this system was done by Mario Coppola, Steven van der Helm and Kimberly McGuire.

The IMAV is the premier conference for researchers and industry to meet and present work on micro sized unmanned flying vehicles. There is work from unsteady aerodynamics to advanced computer vision techniques, so there is something for everyone working on MAVs.

The next installment of the IMAV will be held from the 17th to the 23rd of November 2018 in Melbourne, Australia and will be hosted by RMIT.