In a previous post, we showed that a tiny 40-gram pocket drone can fly autonomously inside a room. Now we stepped it up a notch, by adding another pocket drone in the mix.  This time, they are not only avoiding the obstacles and walls, but also each other.  This year, we presented our work at the 2017 IEEE/RSJ International Conference on Intelligent Robots and Systems (IROS 2017). 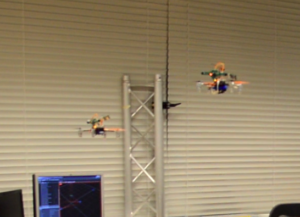 The experiments were conducted with two pocket drones, which are similar in size and components. The same platform has been used in the work of McGuire et al. (2017), also containing a 4-gram stereo-camera and a WiFi module for high-speed ground station telemetry. For this research, a Bluetooth module has been added for inter-MAV ranging and communication (as in our paper Coppola et al. (2017)) and a laser range ring. The latter provides more robustness as it can detect if the MAV is too close to walls that are not within the field of view of the stereo camera. 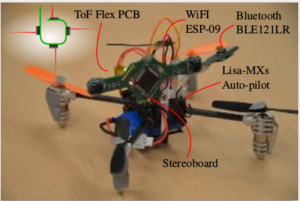 The experiments went as follows: the two pocket drones had a manual take-off and were switched to an autonomous mode in the air. While in the air, they would fly forward into the direction of the camera, until a visually detected obstacle comes within a close range. Meanwhile, they sensed each other’s presence by measuring the signal intensity of their Bluetooth modules. By communicating their velocity (estimated by the stereo camera) and fusing this information with the signal intensity to estimate their relative position to one another. If one would be on a collision course with the other drone, it would stop, change direction and then continue. 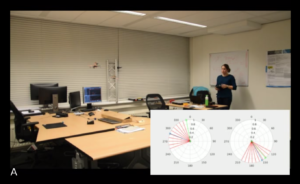 The pocket drones flew autonomously in an office environment, without the help of a motion capture system or any localization system. A youtube list with the videos of the test can be found here. This work is a step towards designing a swarm of pocket drones, able to navigate and explore an indoor building. More general information about the ongoing research can be found here.