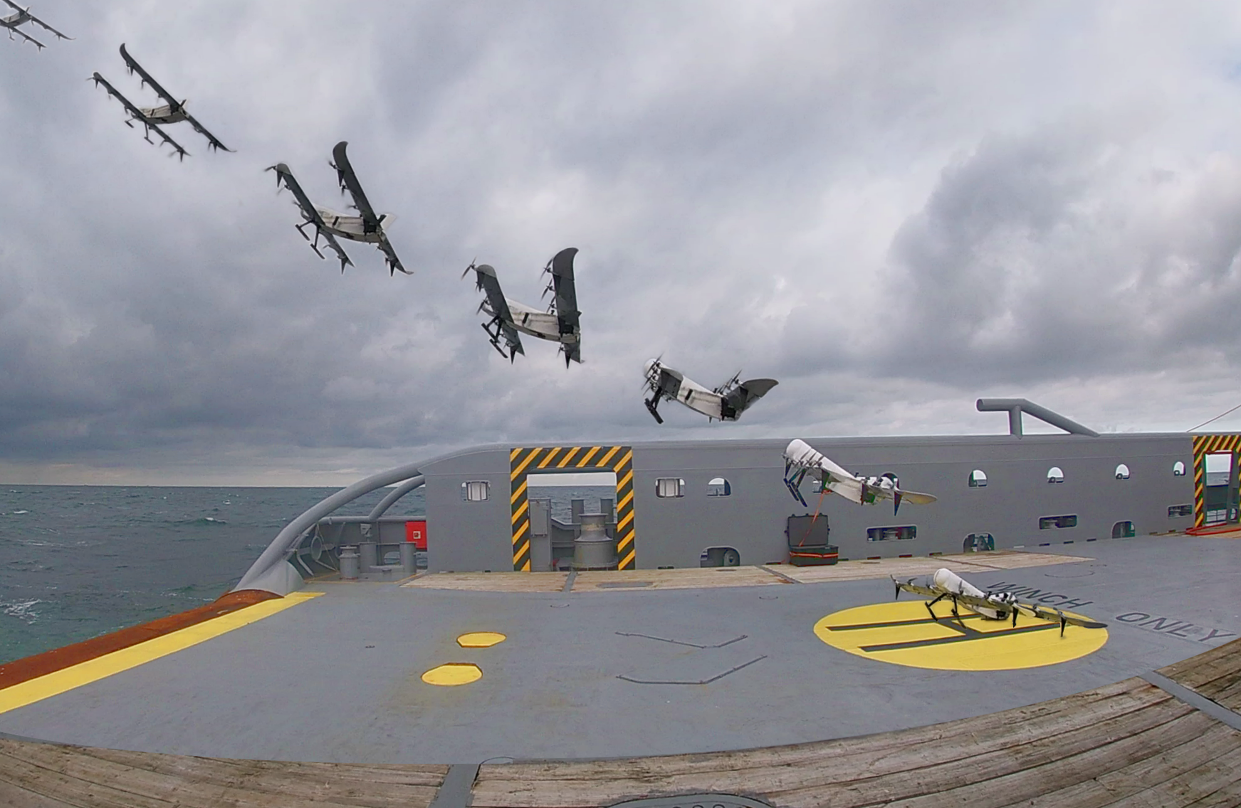 A drone that can fly sustainably for long distances over land and water, and can land almost anywhere, will be able to serve a wide range of applications. There are already drones that fly using ‘green’ hydrogen, but they either fly very slowly or cannot land vertically. That’s why researchers at TU Delft, together with the Royal Netherlands Navy and the Netherlands Coastguard, developed a hydrogen-powered drone that is capable of vertical take-off and landing whilst also being able to fly horizontally efficiently for several hours, much like regular aircraft. The drone uses a combination of hydrogen and batteries as its power source. The first successful tests were held in one of the most challenging scenarios: from a ship sailing on the open seas. This also brings maritime applications within reach and represents a new step in making aviation more sustainable.

A drone that flies over densely populated areas or the open sea has to be able to take off and land vertically, for example on an apartment complex or the afterdeck of a ship. This drains a lot of power from the battery and is detrimental to the flight duration. Fossil fuels are often used to increase aircraft range and endurance, but this is not a particularly sustainable solution. Moreover, to fly efficiently over long distances, a drone needs wings, however, fixed-wing drones require additional facilities to land, such as a runway or a net. So all in all, up to now no drones have been developed that can sustainably fly long distances and still take off and land almost anywhere.

Bart Remes, Project Manager at the Micro Air Vehicle Lab (MAVLab) of TU Delft: “That is why we developed a drone that can take off and land vertically using hydrogen plus a battery set, and that during the horizontal hydrogen-powered flight can recharge the battery via a fuel cell, ready for the vertical landing. The fixed-wing design and the use of hydrogen means the drone can fly horizontally for hours at a time.”

The fully electric drone weighs 13 kilograms and has a wingspan of three meters. It is also very safe: it is powered by 12 motors so even if several motors fail, it can still land safely on the afterdeck of a ship, for example.

The drone is equipped with a 300-bar, 6.8-liter carbon composite hydrogen cylinder. The cylinder feeds hydrogen at low pressure to the 800-watt fuel cell that converts it to electricity. The only emissions are oxygen and water vapor. In addition to the fuel cell that supplies electricity to the motors, there is also a set of batteries that together with the fuel cell provide extra power to the motors during the vertical take-off and landing.

The knowledge acquired while designing the drone can be used to make aviation greener. Henri Werij, Dean of the Faculty of Aerospace Engineering at TU Delft: “One of the most important aspects of this research project is the hydrogen-powered flight. Worldwide, hydrogen is seen as one of the most important contenders for achieving green and sustainable aviation fuel.”

Drones are already regularly used for flying over land, but flying over the sea brings many extra challenges. Wind, saltwater, a moving ship with limited take-off and landing facilities, these are all dynamic conditions that put high demands on the drone. This is why the TU Delft hydrogen drone was not only tested in a wind tunnel but also on Royal Netherlands Navy and Netherlands Coastguard vessels, sailing on the open sea off the Dutch coast.

Thanks to the combination of the wings and the hydrogen cylinder and battery, the TU Delft drone was able to stay airborne in stable flight for over 3.5 hours. These properties make the drone suitable for providing support in reconnaissance and inspection tasks.

Commander Pieter Blank: “Introducing new technologies demands a more exploratory approach than we are used to. The current generation of young people grow up in this way of learning and experimenting, and for us, they are our personnel of the future. This is why we are making every effort to work together with others to create operational applications for these technologies. As an innovator in the Royal Netherlands Navy and Netherlands Coastguard, I am proud of this cooperation with TU Delft. The development of the maritime, hydrogen-powered drone is a true technical breakthrough which has huge future potential.”

Sorry, no publications matched your criteria.