The DelFly Nimble, a new bio-inspired robot developed by MAVLab and employed for insect-flight research, is featured on the cover of the September 14 issue of the Science magazine.

DelFly Nimble is our newest and most agile flapping wing robot. It is controlled by bio-inspired adjustments of the motion of its four flapping wings. It can hover, or fly in any direction. Due to its exceptional agility, approaching that of flies, we could employ it for studying insect flight.

In the research, published in the latest issue of the Science magazine, we have, in collaboration with Experimental Zoology Group of Wageningen UR, discovered and described a new aerodynamic phenomenon helping fruit flies to evade dangers. We have programmed the robot such that it mimics the hypothesized control actions of fruit flies during these rapid banked turns: simultaneous rotations around its forward-pointing (roll) and transversal (pitch) axes. The robot was able to replicate these maneuvers with a remarkable level of similarity, including the rotation around its third, vertical (yaw) axis. 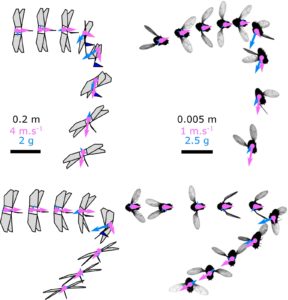 Although this third motion was also observed in fruit flies, only the full knowledge of the robot’s actions and internal processes revealed that this is actually a passive effect. The “translation-induced coupling torque“, as we termed it, is a result of a coupling of the body translation and of the wing motion adjustments inducing the rolling and pitching rotations. This coupling torque helps the robot and flies, but possibly also other natural fliers, turn in the desired direction.

For more details check the TU Delft press release, the DelFly website, or the Science article itself:

We would like to thank the TU Delft Robotics Institute for supporting this research.