Public awareness of drones has risen dramatically over recent months. In the wake of the Gatwick drone incidents, the word “drone” has become synonymous with one big problem. The rather tricky question of how to police rogue Unmanned Aerial Vehicles. These UAVs are often so small and quick that they are quite literally off the radar. And, in the wrong hands or in the wrong locations, they can be disruptive, or even dangerous, to daily life.

At DroneClash, this is the very problem we want to help solve. The competition which will take place in Katwijk, the Netherlands on 16th March 2019 aims to stimulate innovations in counter-drone technology to help make the world a safer place. A place which will enjoy the many potential benefits of drones, without having to worry about them, for example, colliding with a plane.

For the love of drones

Drones, in the right hands, have the potential to offer huge benefits to society. More efficient logistics, rapid emergency health care in remote regions and better environmental surveillance, to name just a few of the emerging possibilities. Not to mention, the kick that lots of people get from flying – or even racing – drones.

Upping the stakes: counter-drone technology as the new frontier

Drones have become far more accessible in recent years with off-the shelf drones costing hundreds rather than thousands of Euros. But for the most committed drone developers, such easy access has taken away the creative challenge of drone design. It was the engineering that made it so much fun in the first place.

For such people, DroneClash will stretch them in a whole manner of new ways. Beyond the usual task of designing and making a mini-machine that flies, they will also have to engineer their drones to dodge and defend against repeated attacks. Not to mention the ultimate challenge of felling the opposing team’s Queen Drone.  How they do it, that is up to them. Jamming is not permitted, but anything else goes. Nets, lasers, fire, water cannons, confetti and hacking were all put to use in DroneClash 2018.

With teams from the Netherlands, UK, Germany and Belgium already having signed up to compete, March 16th’s event looks set to be an unmissable show of the bravest and best in counter-drone technology.

Tickets are available through the DroneClash website. They are priced at 15 Euros for adults and 10 Euros for under-16s and include a full programme of  entertaining and educational events, namely:

Up-close and personal view of DroneClash

Drones are so small and fast that, out in the open, they can be difficult to see out. At DroneClash the battles will take place in a specially-constructed arena, 20 metres squared and 6 metres high, constructed from polycarbonate – the same transparent material used in police riot-shield. The clashes, which are expected to involve everything from flame throwers to water cannons, will be once, spectacular.

Visitors can alternate adrenaline-inducing DroneClash battles, with an informative stroll around the ClashExpo. Here they can learn more about the rapidly developing counter-drone technology sector. Businesses will exhibit emerging technologies and offer the public a chance to see it in action.

At random intervals throughout the day, a rogue TinyWhoop drone will fly in the DroneClash hangar, and members of the audience will be invited to participate in hacking it down. The speediest hackers will win a share of the 1,000 Euro prize pot.

TinyWhoops are a hugely popular off-the shelf brand of drones. They are renowned for their tiny stature – weighing in at less than 100 grams, which also makes them safe to use. They are also relatively affordable, costing around 50 Euros. This makes them a very popular choice for hobbyists.

TinyWhoops may well differ from standard race drones when it comes to size, but when it comes to the electronics inside these diminutive drones, they are not so different from bigger (and therefore more dangerous) drones that could attack airports or other possible targets. As such, they are a safe, but suitable target for a mass hacking experiment.

Visitors to DroneClash 2019 will be invited to sign up in advance for the TinyWhoop hacking challenge by emailing hacking@droneclash.nl . The eager drone disablers will then be given access to an open-source hacking code, developed by Freek van Tienen. Van Tienen, who works as a researcher at the Technical University of Delft, was a member of the DroneClash 2018 FBCT2 team. The team was awarded a special innovation award for their hacking of competitor drones.

For many, the word “hacking” is synonymous with criminal activity, but white hat (or ethical) hacking has an important role to play in exposing security flaws and strengthening systems.

When it comes to drones, hacking has potential both as a means of detecting nefarious drones and as a way to take action in a precise and targeted way. For example, instead of having to go through the potentially lengthy process of confirming drone sightings, clearing an area and firing some sort of counter-drone weapon, a hacker could potentially take over the command of an approaching rogue drone, redirect and land it safely, where it could be investigated.

For DroneClash visitors not quite ready to don a white hat, there will still be a chance to join in in with downing a TinyWhoop. Children and adults alike are encouraged to come to DroneClash armed with their own fun (but safe) counter-drone invention – whether it be a bat and ball or a telescopic drone-snatcher. Nothing sharp or explosive please.

Whether you are flying drones or simply spectating, it is sure to be thirsty and hungry work. Foodtrucks serving hot and cold drinks, hotdogs, meatballs and wraps will be on hand throughout the day so that competitors and audience members alike can recharge their batteries and be ready to do battle.

DroneClash 2019 will take place in Hangar 2 in Valkenburg, Katwijk, the Netherlands. It will open to the public at 11:00 am on Saturday 16th March 2019. The event will draw to a close, after the final battle and the crowning of DroneClash champions of 2019. 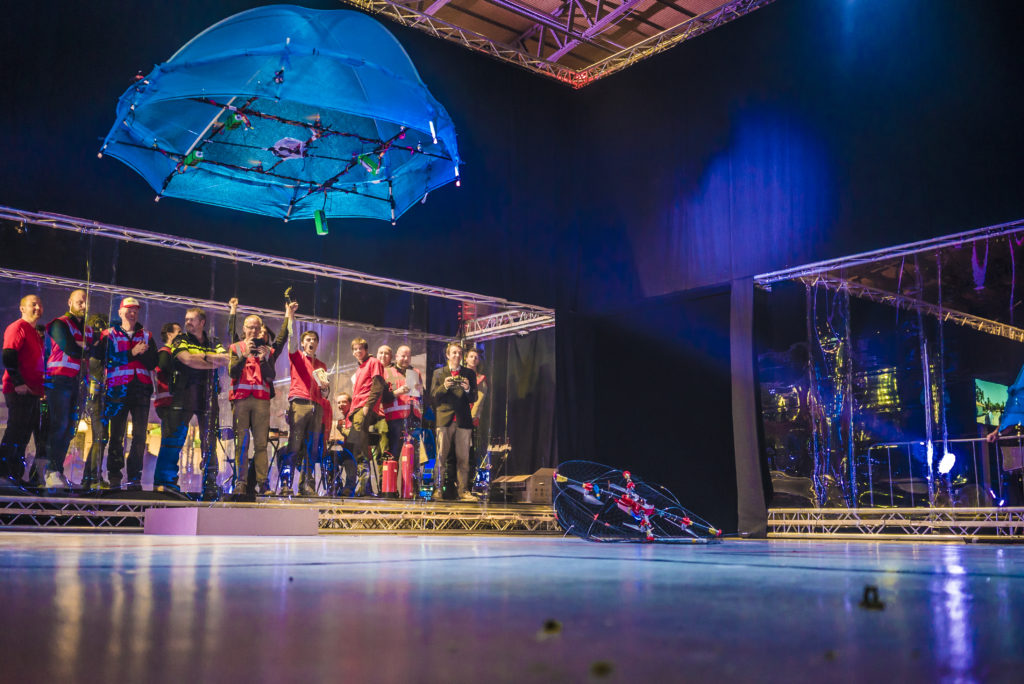